Training through my first trimester went as well as could be expected; it did leave me less prepared than I was last year for the Door County Half Iron, but I was still prepared enough to be successful. In reviewing last year’s race plan, I decided to adopt the same goals (50 minute swim, 3:30 bike, and 2:10 run). Last year, I beat my goals significantly (finishing the bike in 3:12 and the run in under 2 hours). I was less prepared this year and planning to take it a little easier so I decided the same goals were reasonable and I’d hope to beat them on race day.

Early race day morning, the race director determined the swim would be shortened to 500 meters due to significant waves and choppy conditions. In addition it was windy and I was worried about how that would impact my bike (also, my least favorite leg of a triathlon). Pre-race nerves caused me to quickly reassess my goals – my new goal was just to finish the race. 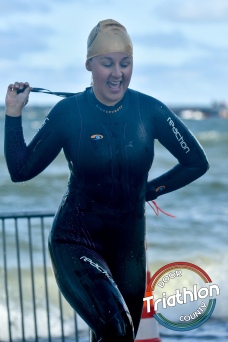 Waters were choppy and there were some white-capped waves; early race morning, the race director determined the swim would be shortened to 500 meters and we’d start 30 minutes late. I took my time preparing transition, got a chocolate muffin, and tried to relax.

I started toward the back of my wave – wanting to avoid too much contact with others. The way out was quite choppy heading directly against large, four foot waves. After we took a left around the first buoy, the waves still made for a challenging swim but the worst was over. My swim was on slower side (even for me), but I didn’t panic and felt calm throughout. Overall, I call it a win.

The first part of the bike flew by and I was making great time. I admittedly did some quick calculations on my speed and possible finish times if I could keep it up. I was nervous, however, about my ability to hold the pace steady. On race day, I prefer to focus on my heart rate rather than speed. It keeps me from pushing too much or being too hard on myself if it’s hot or windy or hilly. My goal was to keep my heart rate in the low 150s; about 10 beats per minute slower than last year. 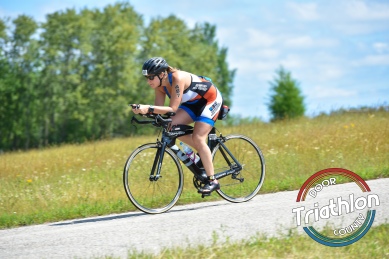 The first 30 miles went by quickly and I was feeling good; miles 35-45, however, felt like an eternity. My bottom was killing me (likely due to not enough time in the saddle during training) and it was hard to think of anything else. In addition, with all the male age groups going after the females, I spent the majority of the race, especially the second half, getting passed. First by faster women, then one-by-one all my teammates, and finally by what seemed like every man racing. I tried to not let it get to me. (I think it did a little bit, though.)

By the time I got to 45 miles, I knew I could muscle through to the end. I distracted myself by doing math: How many calories have I eaten? What will my bike finish time be if I continue on pace? When will a team mate pass me assuming they started ‘x’ minutes after me, swam in about ‘x’ minutes, and are traveling ‘x’ mph? Ridiculous, I know. It was something else to think about.

I rolled into transition just under 3:20 and was so grateful to get off the damn bike!

Staying consistent with my heart rate goals of ~10bmp lower than last year, I aimed to stay in the low 160s for the first 3/4 of the run. I came out of transition strong and was feeling great but when I noticed my heart rate was creeping up to 170, I slowed it down a bit. I found a good rhythm around 164 bmp and would let it climb a bit up hills. When I saw someone ahead I knew I could pass and/or heard someone coming up behind me, I’d look at my heart rate monitor diligently making sure I didn’t get too excited and speed up. I didn’t want to burn out too quickly.

I took a walking break at every aid station to take down nutrition and water. The walking breaks were a great reprieve and a good reminder to eat and drink. 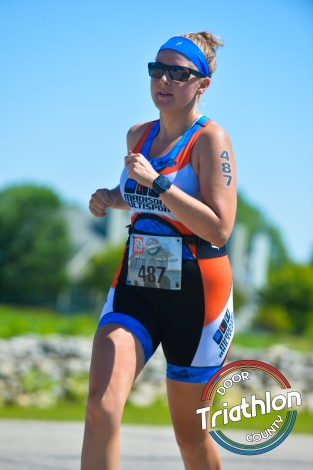 I think of the half marathon in roughly 4x 5Ks. The first 5K flew by; I felt like I was just getting in the groove. After the 2nd 5K, I was still feeling great and confident I could finish out at that pace. Just after the 3rd 5K is the bluff – a significant climb that most folks walk (myself included). I was pleased to find cheering teammates on the bluff who made the climb with me. After making it up the bluff I knew I had about one more 5K and considered pushing the pace (and my heart rate) through the end of the race. I had a brief moment of doubt wondering if it was OK to push harder with baby on board. My internal dialogue went something like this “Alright, baby, I’m going to push it a little more for the last 5K. You let me know if that’s not OK, but it would be really great if you could make it just 3 more miles.” Looking back at that conversation, I think it was mostly a reminder to myself that if something were wrong, if I were pushing too hard, I’d know. I finished strong and felt great crossing the finish line.

I felt great after the race – certainly tired, but OK. Last year, I remember being shaky and needing to sit for 15 minutes to regroup immediately post-race. 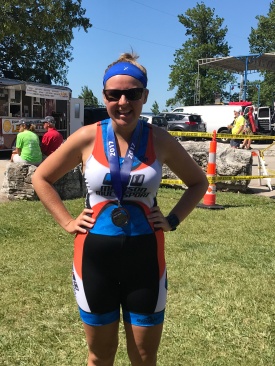 While I felt proud after the race – just happy I finished, I became less content in the following days. I’m a judger – I judge things and deem them good or bad, right or wrong. I don’t just judge others, I most predominantly judge myself. I compared my time from last year, I thought about the 10 beats per minute slower my heart rate average was this year, and I remembered how good I felt post-race. I began to wonder if I phoned it in; even worse, I wondered if I took it easy and was using being pregnant as an excuse. I was only 12 weeks pregnant, I had only gained ~3 pounds, and I felt great. Why should being pregnant be slowing me down or keeping me back now?

I’m admittedly still working through this a bit. I’m focusing on how great it is that I can accomplish a 70.3 mile race at all (let-alone 12 weeks pregnant). I’m reminding myself that this year is about striking a balance, not being competitive (even with myself), and enjoying both the races and my training. While I didn’t have a great race on Sunday, I did meet all of my goals; that is a success. 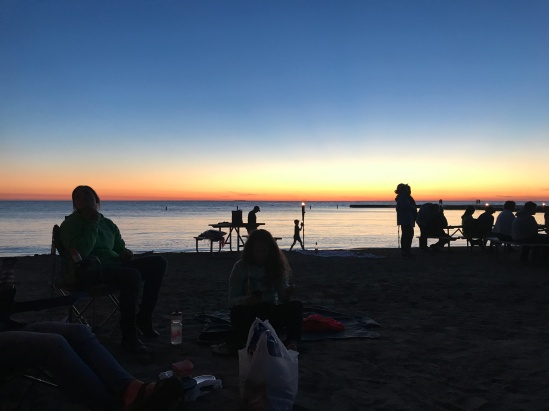